Money for the purchase of books and other necessary expenses was contributed or secured from the profits of numerous benefits including parties, food sales, movies, and performances of the local dramatic club. The library was first located at 1283 Springfield Avenue in the Red Cross Rooms (now the location of Positive Image Photo).

The original collection of books was modest.  The Library Committee purchased twenty new volumes and borrowed another fifty from the state.  By the end of the first year, the collection had increased to 1500 volumes and the free circulation was reported to be 175 books a week.

A handwritten list of books in the library's collection, on display at the Salt Box Museum

Clara Wahl, the first librarian, initially received no salary. In 1925, Wahl was officially hired by the Borough Council to be the librarian and received $250 a year, much of which she used to buy books and supplies for her beloved library.  Her assistants were all volunteers, and her duties included the building of fires in an old stove that heated the library in winter.  Her daughter Frances Wahl, who served on the Board of Trustees for many years, recalled that the roof leaked.  The family was once roused from their beds during a rainstorm to rush to the library with umbrellas and other coverings to place over the books.

In 1928, the library was moved to the building located at 1310-1312 Springfield Avenue, which is currently the location of Cartridge World, Anew Things of Beauty and In the Driver's Seat. The building had formerly served as the New Providence Academy, and the library would remain there until after World War II.

When Mrs. Wahl’s many years of faithful service ended with her resignation in 1939, her successor was Margaret Radtke.  Finances were always a concern as the budget was always lower than needed and many volunteers contributed their own clerical supplies.

In a November 1941 election, New Providence voters voted 207-43 to establish a free public library in the Borough of New Providence. Prior to January 1942, the library had been a nonprofit organization; now it would be part of the municipal government. The Library Committee gave way to a Board of Trustees appointed by the mayor, who was an ex officio member, as was the Superintendent of Schools.  Five other citizens served on the board as well.

In 1946, the library celebrated its 25th anniversary.  The Borough Council appropriated $1200 for the library that year.  Another $176 was added from fines, rentals, and miscellaneous sources.  The total number of books was 6268, with 722 registered borrowers.

In the late 1940s, a community fundraising drive was held to build a formal library that would also serve as a war memorial. As a result, in 1950, a new brick building on Elkwood Avenue was dedicated as the Memorial Library; it remains part of the current library to this day.  The library's architect, Emil Schmidlin, was a New Providence resident who donated his services free of charge, and the builder Charles Nael was also generous.

The population of New Providence increased after World War II, along with demand for expanded library services.  The number of books and materials in the collection approached 20,000.  It became apparent that more room was needed and an addition was built in 1958 under the direction of Betty C. Proctor, who had become Head Librarian after the retirement of Margaret Radtke in 1952.

In 1963, the library hired three full-time librarians, in response to a report made for New Providence by the New Jersey State Library.  In 1965, Bell Labs - also located in New Providence - prepared an exhibit about its communication satellites Telstar and Echo at the library.

In 1964, the Borough Council appropriated $200,000 for additions to the library.  Federal funds provided another $50,000, for new construction and renovation of the older parts of the building.  Thanks to the addition, the library's space quadrupled, and it now had a meeting room for public use.  The local Jaycees carried 20,000 books from the old reading room to the new shelves shortly before the new addition was dedicated in 1966. 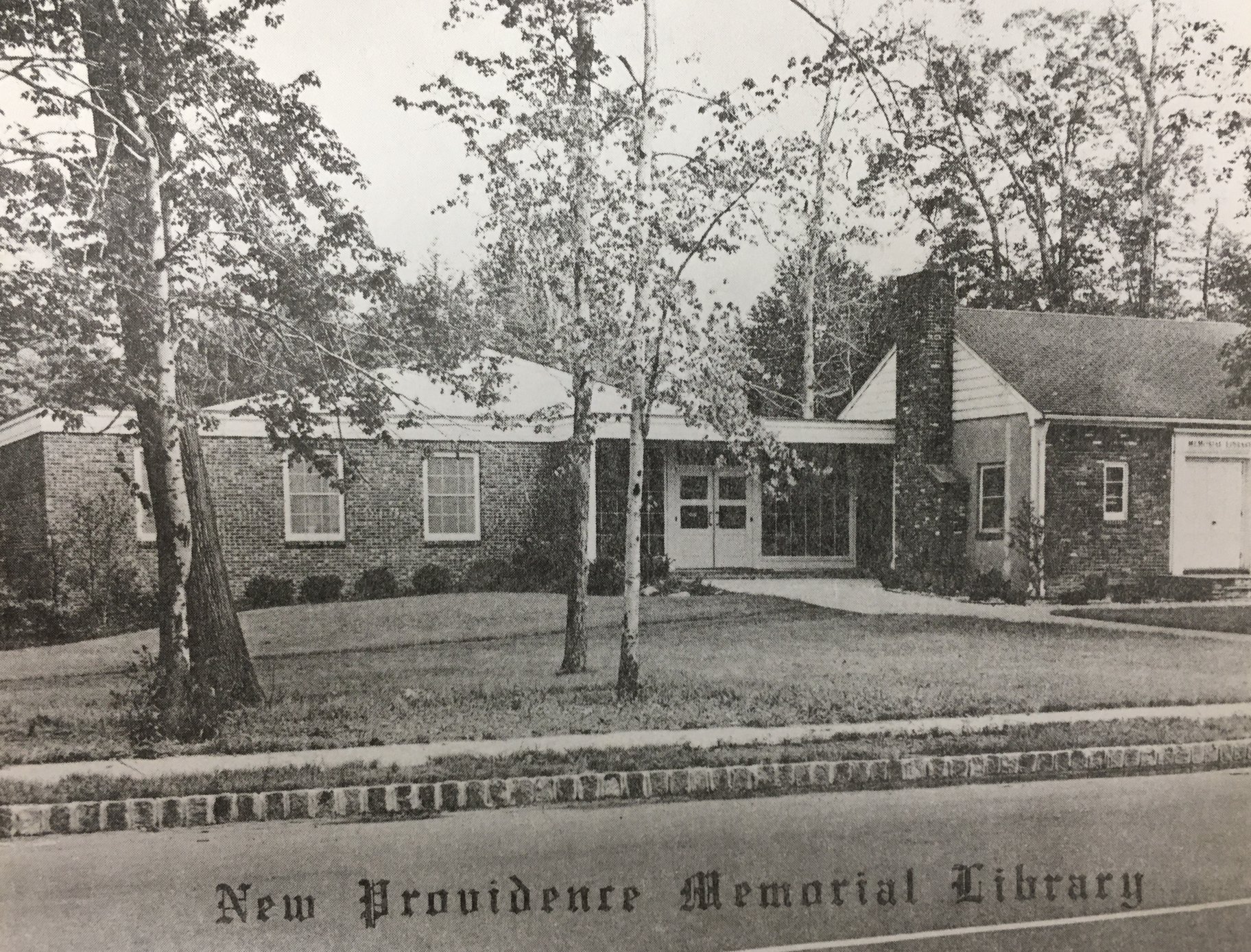 In 1971, interlibrary loan service began with the founding of the Morris-Union Federation of libraries, of which New Providence Memorial Library was a founding member.  The library is also known to have had an Olivetti copier in the reading room at that time.

In 1974, the Friends of the New Providence Library formed.  This was not the first Friends group; a previous Friends of the Library organization had supported the library in the 1960s.

On August 24, 1992, the library suffered serious damage from a fire that gutted the original section of the building, a staff area which housed more than 3,000 books, newspapers and magazines.  Books damaged by the water used to extinguish the fire were stored in the freezers of local businesses until they could be restored.  An outpouring of support from the community and funds from insurance allowed for interior renovations and replacement of library materials, with the library reopening on April 5, 1993.

The library had new leadership again in 1995, when Carol Abatelli became director, followed by director Ann M. Oster in November 1997.  In the 1990s, the library undertook a retrospective conversion project to computerize its collection records. However, the card catalog was kept up to date alongside the online catalog until 2001.

In 2001, the front entrance was renovated to bring the entrance and ramp into compliance with ADA requirements and to alleviate a potentially hazardous door system.  It was made possible with a combination of Community Development Block Grants and library funds.

The current library building is the result of a community-wide effort to bring the library into the 21st century.  Groundbreaking took place on February 28, 2004 with director Ann Oster and president of the Board of Trustees Betty Metzger present.  The million dollar project was funded by State grants, dedication brick sales, wine tastings, road races and walks, local Scout and private donations, proceeds from concerts and plays, and a variety of other fundraisers.  It was the largest fundraising project ever undertaken in New Providence.

The Grand Re-Opening was held on July 2, 2005.  A major part of the renovation was the expansion of the Children’s Room, a much-needed area for the variety and number of reading programs and activities for preschoolers to upper elementary students.  Two meeting rooms were added to enhance the library’s role as a community cultural center.

When Hurricane Sandy hit New Jersey in 2012, the library served as a warming center for nearly two weeks for residents without heat or electricity. It was a place for residents could recharge cell phones, tablets and laptops as well.  In 2017, Colleen Byrne retired, and reference librarian Lisa Florio became interim director. The Board of Trustees appointed Lisa Florio director in 2018.

In 2019, yearly circulation of library materials surpassed 216,000, including both physical materials and electronic items. Attendance numbers at library programs held that year reached over 7,000.

In 2020, New Jersey libraries were closed by executive order of the governor for three months to slow the spread of coronavirus.  During the building closure, the library provided free access to ebooks and other digital materials, virtual programs, and eventually contactless pickup of books and DVDs in the front lobby.

The New Providence Memorial Library with its modern, expanded facilities and offerings attracts visitors from out of town as well as its own patrons.  It has truly grown into a full-service community and informational center for all.

No lobby pick up on 8/5 due to power outage

.....we are starting to circulate our collection again!

We are very happy to be back and allowed to offer contactless pickup service.  Materials will be circulated from a table behind the front doors.  Holds can be placed for items not currently available and now you can also request items that are on the shelf.  Place holds and requests through the online catalog or call us.

There are some limitations so please be sure to check else where on this site for the complete list of instructions.